Just outside the Aqua Midtown Condos in downtown Atlanta, a large mass of honey bees were all clinging together 20 feet up in a tree, about 15,000 of them. Now how they got there seems somewhat of a mystery. Surrounded with tall buildings and busy streets the area does not look like an ideal living situation for the bees. 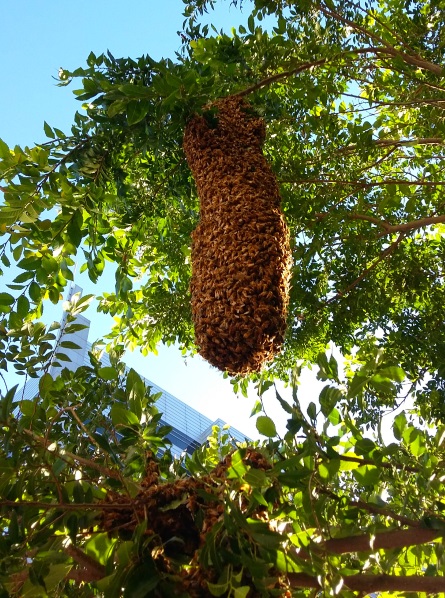 So what are honey bees doing in downtown Atlanta? Honey bees are able to forage as far out as a 2 or 3 mile radius (or more if they have to) of where their hive is at. With Atlanta's many trees, landscaping, and flowers, honey bees can do surprisingly well. This swarm of bees was resting while in route to find a permanent location. They would have had to come from a parent colony most likely within a half mile of where they were now at. The honey bees had left the parent colony with the old queen and half the bees. The remaining bees would raise a new queen. If both sets of bees survive, they will have successfully doubled their numbers.

These honey bees, which would be moving on in a day or two, really did not pose too much of a problem being so high up. However, since the bees were in a high traffic area and to be on the safe side, the manager decided it was wise to have them removed by a professional bee removal company. Another benefit is, removing the swarm also prevents them from finding an undesirable location as their permanent home, such as inside a structure.

Many people may have a picture of honey bees mainly living in hollow tree trunks. This is what I thought before I started Southeast Bee Removal. But after doing many many bee removals, I have found that honey bees are especially fond of floor joists in homes and apartments. Once the bees move in places such as this, it is much more difficult and more expensive to have them removed.

So the bees had to go, and Southeast Bee Removal was contacted on a Friday afternoon to remove the bees as soon as possible. I came out first thing Saturday morning. The bees were fairly easy to spot. As the sun was coming up the scout bees began flying around more. They could be seen coming and going from the main oblong cluster of bees.

From the Ground Up

I quickly ran a 100 foot extension cord from the nearest accessible outlet and set up my Little Giant a-frame ladder which is capable of reaching bee nests that are high up on tree limbs. I put on my ventilated bee jacket and canvas gloves and climbed the ladder. Then I began vacuuming up bees into my bee cage for relocation. People were stopping and staring at the fascinating (and strange) sight.

While vacuuming the bees, a clump of them were accidentally dislodged and fell to the sidewalk below. Now the place I was at, was a busy intersection with traffic lights. When the clump of several hundred bees fell, the bees were then about 10 feet from the street where cars were driving by. Shortly after this, a man in a convertible with the top down drove up and stopped at the red light. Bees were buzzing around and I was hoping that he wouldn't panic. However, he didn't seem to noticed and pulled ahead when the traffic light turned green. I was relieved! I finished vacuuming up the rest of the bees, packed up my equipment, and drove home. The bees survived, I survived, and no body was hurt in the process. It was a good day!

Get an Estimate
© Southeast Bee Removal. All Rights Reserved. Website Designed and Developed by